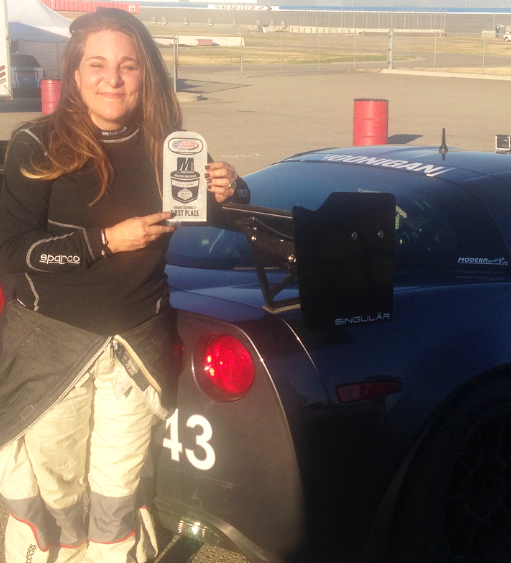 Can I just tell you how nervous I was?? You have no idea. But as soon as they dropped that green flag, it was on! No more nerves. Throughout all the issues, driving by my oil pressure gauge due to sever issues with the oil pressure dropping at the exit of T2, I had some insane battles and won them all. Not only did I win my class, I was second overall out of GT1, GT2, AS and two other classes on track, totaling 28 cars. What a rush! However, I hate to report that while we won the race on Saturday, we blew up  on the 7th lap of the race while in the lead on Sunday … along with just about the entire field but two cars in GT1 and GT2. It was nuts!

More than anything, I had a blast out there and I proved to myself that there is no doubt that I am good enough to compete with these seasoned drivers. I am only going to get better and I am already winning! I can’t wait to get the car back together and make the next Majors race in March at Chuckwalla Valley Raceway.

Big thank you to my Crew Chief, Garrett Yamada, as well as Nick Owen that helped out immensely on radio. And to the partners of SCR, you all make this dream possible. BRING IT ON!!!!